Ten of Japan's famous bullet trains will be scrapped. They were caught in the floods after Typhoon Hagibis hit eastern Japan in October. The typhoon caused widespread damage and loss of life in Japan. There were many photos and TV footage of the 10 shiny bullet trains lined up next to each other at a train yard near the central city of Nagano. They were deep in floodwater after the nearby Chikuma River burst its banks. The trains used to run between Tokyo and a city on the Sea of Japan coast called Kanazawa. The line is now running 80 per cent of its normal services. The bullet train company said it hopes to be running a full service again by the end of March 2020. 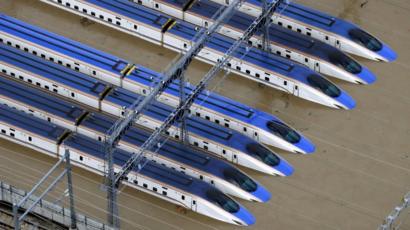 Bullet trains are called Shinkansen in Japan. They started in 1964 in time for the Tokyo Olympics. They became an iconic symbol of Japan and were the world's fastest trains. They currently reach speeds of 320kph. The bullet train rail network has expanded to currently consist of 2,764km. People take around 350 million rides a year on the Shinkansen. A Shinkansen president, Yuji Fukasawa, spoke about the flooded trains. He said the floodwater seriously damaged their motors and braking systems. The total cost of the damage is around $135 million. He said: "For stability and safety, we will replace the trains with newly built ones instead of repairing them."